There Are Two Deserts 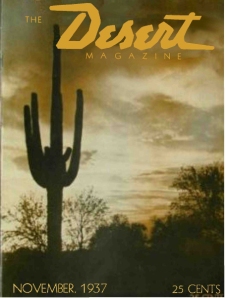 This was the first editorial written for Desert Magazine. Randall Henderson had quite a vision from the start and spent the two decades as the publisher-editor.

ONE IS A GRIM desolate wasteland. It is the home of venomous reptiles and stinging insects, of vicious thorn-covered plants and trees, and of unbearable heat. This is the desert seen by the stranger speeding along the highway, impatient to be out of “this damnable country.” It is the desert visualized by those children of luxury to whom any environment is unbearable which does not provide all of the comforts and services of a pampering civilization. It is a concept fostered by fiction writers who dramatize the tragedies of the desert for the profit it will bring them. But the stranger and the uninitiated see only the mask.

The other Desert—the real Desert-—is not for the eyes of the superficial observer, or the fearful soul or the cynic. It is a land, the character of which is hidden except to those who come with friendliness and understanding. To these the Desert offers rare gifts: health-giving sunshine—a sky that is studded with diamonds—a breeze that bears no poison—a landscape of pastel colors such as no artist can duplicate—thorn-covered plants which during countless ages have clung tenaciously to life through heat and drought and wind and the depredations of thirsty animals, and yet each season send forth blossoms of exquisite coloring as a symbol of courage that has triumphed over terrifying obstacles. To those who come to the Desert with friendliness, it gives friendship; to those who come with courage, it gives new strength of character. Those seeking relaxation find release from the world of man-made troubles. For those seeking beauty, the Desert offers nature’s rarest artistry. This is the Desert that men and women learn to love.

NEARLY every creed and industry and locality has its journal—except the Desert. Here, within the boundaries of Arizona, California, Nevada, New Mexico and Utah resides a great family of human beings—the highest type of American citizenship—with a common heritage of environment and interest and opportunity, yet residing for the most part in regions that are remote from the so-called cultural centers. This is the last great frontier of the United States. It will be the purpose of the Desert Magazine to entertain and serve the people whom desire or circumstance have brought to this Desert frontier. But also, the magazine will carry as accurately as possible in word and picture, the spirit of the real Desert to those countless men and women who have been intrigued by the charm of the desert, but whose homes are elsewhere.

This is to be a friendly, personal magazine, written for the people of the Desert and their friends—and insofar as possible, by Desert people. Preference will be given to those writers and artists—yes, and poets—whose inspiration comes from close association with the scented greasewood, the shifting sand dunes, the coloring of Desert landscapes, from precipitous canyons and gorgeous sunsets.

The Desert has its own traditions—art—literature—industry and commerce. It will be the purpose of the Desert Magazine to crystallize and preserve these phases of Desert life as a culture distinctive of arid but virile America. We would give character and personality to the pursuits of Desert peoples—create a keener consciousness of the heritage which is theirs—bring them a little closer together in a bond of pride in their Desert homes, and perhaps break down in some measure the prejudice against the Desert which is born of misunderstanding and fear. It is an idealistic goal, to be sure, but without vision the Desert would still be a forbidding wasteland—uninhabited and shunned. The staff of the Desert Magazine has undertaken its task with the same unbounded confidence which has brought a million people to a land which once was regarded as unfit for human habitation. We want to give to the folks who live on the Desert— and to those who are interested in the Desert—something that will make their lives a little happier and a little finer —something worthwhile. In the accomplishment of this purpose we ask for the cooperation and help of all friends of the Desert everywhere.

12 thoughts on “There Are Two Deserts”