ROCKHOUNDS IN THE FIELD, WILEY WELL DISTRICT
In this area you are literally surrounded by diggings. Almost any of the old holes, after some cleaning out, will yield geodes—or you may want to hunt for float geodes and open a new hole. Opportunities here are almost unlimited. Recently we were asked to name the best place in the Southwest for a novice rockhound to visit on his first field trip. Without hesitation we chose the Hauser Beds.
If you don’t care for digging, nice specimens can be found on the dumps on the slopes below each hole. We actually picked up a whole geode, later found to be lined with amethyst quartz crystals, on one of these dumps. If you like to dig for treasure, you may have the thrill of uncovering a “nest” of geodes—by no means a rare event. Digging here is easy; the volcanic ash in which the geodes are found is powdery.
We recommend that these geodes be broken open, rather than sawed. More than 85% of the Hauser geodes contain little or no agate; their hollows more often lined with beautiful crystals. Sawing does nothing to enhance the beauty of the crystals, and the brown rock geode shell will not take even a fair polish. We crack all of our Hauser geodes by carefully chipping with a chisel along a line in about three places on one face. We choose the longer dimension, and if carefully done, we end up with two nice halves. Hitting geodes with a hammer only results in smashed specimens.
POTATO PATCH: This field lying south of the road into Hauser Beds has been badly neglected by past writers. True, the Potato Patch is not as extensive as Hauser and the digging is not as easy, but a good percentage of the Potato Patch geodes contain prized amethyst quartz crystals. Some of the finest amethyst geodes that have originated in America were found here.
After leaving the Hauser Bed Road, about W2 miles from Middle Camp, the Potato Patch Road dips into a small valley. Directly to the east, near the top of a low ridge, lie the beds. The geodes are contained in a layer of volcanic ash about a foot or two thick; the whole overlaid by a layer of lava. This makes for difficult digging, but plenty of it has been done here in the past. A pry bar and a medium or heavy hammer will help break-up the lava layer. 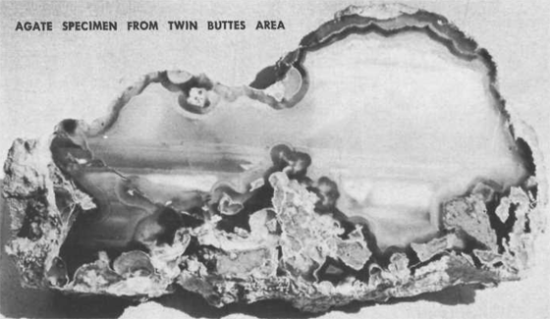 Agate Specimen from the Twin Buttes Area
TWIN BUTTES: In the November ’50 Desert Magazine, Harold Weight wrote about an agate field in the west-end of the Palo Verde Mountains near a prominent formation which he called Double Butte. As more visitors entered the area, two other names — “The Thumbs” and “Twin Buttes” — have been used to describe the landmark. At present, the most popular of the three names is Twin Buttes. At the time Weight wrote about this area, the road was fit for burro or four-wheeldrive vehicle. Continued penetration by rockhounds improved the road somewhat, but for several years this was a stretch to be dreaded. Then came discovery of a manganese deposit near the agate field, and a new entrance road was cut through the area. Who the miners were, we never learned, for the ore deposit played-out before we could offer our thanks for the boulevard they had created.
To reach the Twin Buttes area, travel south from Wiley Well about 5 1/2 -miles. Just after you pass the hills beyond the Hauser Bed turnoff, the road crosses a deep but easily passable wash. The Twin Buttes cutoff is on the left just beyond the wash, and can be seen winding over the small hills and washes to the east. About 1 1/2 – miles along the Twin Buttes Road, another wash is crossed. Just beyond this point, the road makes a sharp left turn, and then forks. The left branch leads to a nice camping area at the northern edge of the agate field at the foot of the buttes. We usually take the unimproved right-fork and follow it about a half-mile to its end, where there is a large parking area and a fair campground. From here a trail leads south down into a valley which contains the main agate fields. How extensive the deposit is, we do not know, for the hunting is usually so good that we seldom need go more than a half-mile beyond our car.
When this area was first worked a large number of nice nodules up to six-inches long and containing beautiful moss and banded agate were dug from a weathered lava bed. This deposit lies to the west of the trail. Further along are other signs of digging. All of these holes were productive, and may still be so, but the digging is far from easy.
The flat areas yield agate float. The white-to-yellowish material usually is poor or worthless when cut, and the best specimens are those small irregular pieces that are black with desert varnish. Careful chipping of the corner of one of these may reveal red, blue, purple or orange agate—or excellent- quality fortification agate madeup of roughly circular concentric banding. We also have found green, black and orange moss agate, and, on rare occasions, fine golden sagenite. This sagenite, made up of bundles and sprays of golden needles in a blue or purplish background, is really prize material.
The thing to strive for in this field is quality. The good pieces are seldom more than few inches long in greatest dimension. Out of most pieces we cut only a single cabochon. Our favorite method of hunting such material is to sit down on the ground and carefully search a five – to – ten foot circle, repeating this across the flat. Easiest rockhounding we know of!
If you camp at the foot of the buttes, you can reach the main field by walking up the valley and wash to the west. Hunting is good a short distance out of camp, and don’t overlook the slopes to the right as you move westward. They have produced fine material.
PALO VERDE PASS: In the eastern- end of the Palo Verde Mountains lies Palo Verde Pass. This defile contains an agate field that Harold Weight wrote about in the November ’56 Desert Magazine. Evidently, the field is an extension of the other areas to the west, for we find the material to be quite similar. At no time, as far as we can determine, was the Palo Verde Pass material plentiful, and the visits of many rockhounds have removed most of the accessible supply